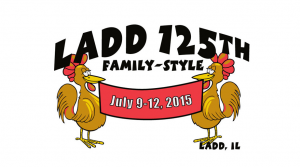 125th Book – Ladd’s 125th Anniversary Commemorative Book ($35) is available for purchase in the Village Clerk’s office during regular business hours.  The 127-page book is a yearbook-style, hardbound book published in full color.  Books can also be mailed for an additional charge which includes insurance and tracking.  For more information, call the Clerk’s office @ (815) 894-2440 or e-mail info@villageofladd.com.

125th DVD – Ladd’s 125th DVD is a 2-disc set in a plastic case with a price of $20/set.  One DVD contains a video of the entire Grand Parade and the other is a still photo montage of the four-day celebration set to music.  Some of the music used in the DVD was provided by Selby Street.  The Grand Parade lineup can be viewed here.

An $840 donation was made to Heifer International from the collection taken during the Sunday Catholic Mass on Main.  Additional information on the donation can be viewed here.

125 balloons were released during the Opening Ceremony on Thursday, July 9, 2015.  The $125.00 prize to the finder of the balloon that had traveled the farthest went to a Milan, Michigan family.

At the final meeting following Ladd’s 125th Anniversary Celebration, the committee approved donations to the following Ladd organizations:  Ladd School Foundation – $2,015; Ladd Fire Department – $1,500; Ladd Public Library – $1,000; Ladd Parks & Recreation – $1,000; Ladd Community Center – $1,000; and a $10,369 reimbursement to the Village of Ladd for expenses incurred.  Funds were set aside for the publication of the 125th Commemorative Book and for a future fireworks display.  The committee also invested $2,015 in a Certificate of Deposit for Ladd’s 150th Anniversary Celebration to be held in 2040. 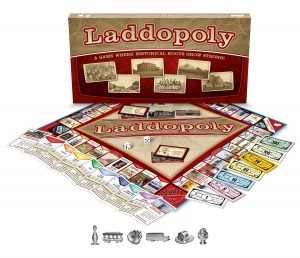 Laddopoly, the game about Ladd, was an overwhelming success and sold out prior to the celebration.  Thank you to the families and businesses who sponsored the game tokens and properties on the board and to everyone who supported this project by purchasing a game.  Proceeds from the sale of Laddopoly benefited Ladd’s 125th Anniversary Celebration.

To create the best possible four-day celebration for the Village of Ladd while allowing businesses and clubs to have financial success.